Since 1961 international short film competition has been presenting the best short documentary, narrative and animated films. This is the most stylistically diverse collection of movies from the directors coming from the most distant corners of the world, which makes this competition the most intriguing one at the festival. This year 10 documentaries, 13 narrative films and 12 animations will compete for the Golden Dragon award and nomination for European Film Award. The winning will also pave the way to Oscar nomination.

Poland will be represented in all categories: documentary, narrative and animated movie. Among short documentaries we will see “The Sisters” by Michał Hytroś presenting the lives of 12 nuns in the oldest enclosed women’s convent in Poland. Marta Pajek will come back to the Festival with her sensual animation “III”,  which will also be shown in the main short film competition at Cannes. The film is the third part of the “Impossible Figures and Other Stories” triptych. The previous part received the Silver Hobby-Horse at the Festival in 2016. Among the narrative films there are two Polish titles: “Users” by Jakub Piątek and “Morning Has Broken” by Olga Chajdas. Both of them, even though completely different, talk about loneliness and losing yourself. The former takes us into the dangerous virtual reality, the latter exposes desperate attempts to cope with one’s inner world.

Among documentary films we have some family stories and personal dramas: “Film for Carlos” in which the director, Renato Borrayo Serranabout, captures inter-generational and intercultural differences in his family; “My Home Video” (dir. Andreas Boschmann)  – the story of a brother and sister brought up by their grandparents, who have a chance to bring back the forgotten recollections of their parents thanks to an old video tape they discovered; “Love Immigrant” (dir. Ori Netterman, Adi Toledano) in which a couple of main characters – British man and Israeli woman – have to face the hard task of proving their love to obtain a visa that would allow Phil to live and work in Israel; or “Tungrus” (dir. Rishi Chandna), a tragicomic story of a family from India living with cats and… a cock terrorising all family members.

We will not miss a broader look at the world. The terror of the Syrian war is depicted in a disturbing experimental documentary “People of the Wasteland” directed by Heby Khaled and presented by the witness of these events from the first-person perspective which only adds to the horror of the featured situations. The protagonist of the animated documentary “Tracing Addai” (dir. Esther Niemeier) also lands in Syria after disappearing without a trace from native Germany. The tragic ending of the story is a starting point for trying to understand what really happened. Post-war trauma is also present in the film “Joe Boots” (dir. Florian Baron): the eponymous character, influenced by September 11 attacks, joined the army and survived a living nightmare in Iraq, which has not ended when he came back home. The Driver Is Red” (dir. Randall Christopher), another animated documentary, is a suspense story about tracing one of the biggest Nazi war criminals. The majestic beauty of the mighty and frosty Russia is shown in the film “The Northerners” (dir. Ilia Povolotskiy). Three characters, three different professions and three different views on the Kola Peninsula.

The narrative films will transport us in time and space. In 1993 the news of a brutal murder of a 2-year-old boy James Bulger, which became the inspiration for the Polish film “Playground”, shook the world. “Detainment” (dir. Vincent Lambe) recreates the events of that day relying on the footage released by the police and transcript of the police interrogation of the young criminals. “The Christmas Gift” (dir. Bogdan Muresanu) shows Romania after the political transformation of December ’89, but with a tragicomic twist in which the key role is given to a certain letter to Santa Claus. Set in the severe winter Iranian landscape “The Distance” (dir. Yousef Kargar) tells the story of a man coming back to Georgia to bring his friend’s family bad news. “Icarus” (dir. Nicolas Boucart) depicts the myth of Dedalus and Icarus set in the hypnotic scenery of the Groix island in Brittany.

The narrative films capture also burning social issues which are tackled everywhere in the world. In “Debris” (dir. Julio Ramos) the construction of a luxurious villa is interrupted by a serious accident. None of the workers is working there legally, so the decision to save their colleague’s life takes a dramatic turn. “Almost Everything” (dir. Lisa Gertsch) is a moving, subtle story of love and a developing illness told through a road movie. How are Polish people perceived in the UK? The film “Leash” directed by Harry Lighton tries to answer this question. “Release the Dogs” (dir. Emmanuelle Fleytoux) portrays a love triangle, a difficult relation between the protagonist and two most important men in her life: her lover and her brother. Another film talking about love is… “Love” (dir. Oliver Adam Kusio), in which the main character pays a prostitute to pretend to be his girlfriend at his wife’s funeral, from whom he’s been estranged for a long time.

“Salvation” (Thora Hilmarsdottir) is an example of dark cinema straight from Iceland, where sacrum and profanum, and faith and obsession collide. Katrín finds out that she was given a blood transfusion which is against her faith. Something dangerous lives inside the foreign blood that now runs through her veins. “Home Shopper”, directed by Dev Patel, is a crazy dark comedy about what can happen when husband starts to complain about wife’s passion for teleshopping.

In the animated films the drama is intertwined with comedy. In “Manivald” by Chintis Lundgren the 33rd birthday of Manivald the fox is interrupted by a broken washing machine. The wolf who shows up will turn the life of the fox and his mother upside down. “Keep Your Hair On, Oliver” is a story of a man desperately trying to hide from his wife that he’s getting bold. Yet all of his ideas start to fail. How can we cross the river with a fox, a rabbit and a cabbage, if we only have space for one of them in our boat, the fox cannot be left alone with the rabbit, and the rabbit alone with the cabbage? Peter Peake created in “Take Rabbit” an animated version of this old logic puzzle.

Just like the documentaries, the animations this year also capture the difficult subjects of dealing with trauma, reflecting on one’s past and discovering one’s own identity. “Obon” (dir. André Hörmann, Samo (Anna Bergmann) is a film, which on one hand portrays the cruelty of war with all its brutality, and on the other – subtly shows a bond between the father and the daughter. Also “Letting Go” (dir. Ulö Pikkov), inspired by the Japanese tradition, deals with the demons from the past. In “Fundamental” the director ShihChieh Chiu presents the world of religious fanaticism through the eyes of an adolescent boy. Adopting the style of an Asian cartoon, the author critically presents, not without a sense of humour, a sin and spiritual rituals. “Coyote” is a crazy, psychedelic animation about a coyote whose whole family was murdered by a wolf, so he sets off on a quest to avenge them. 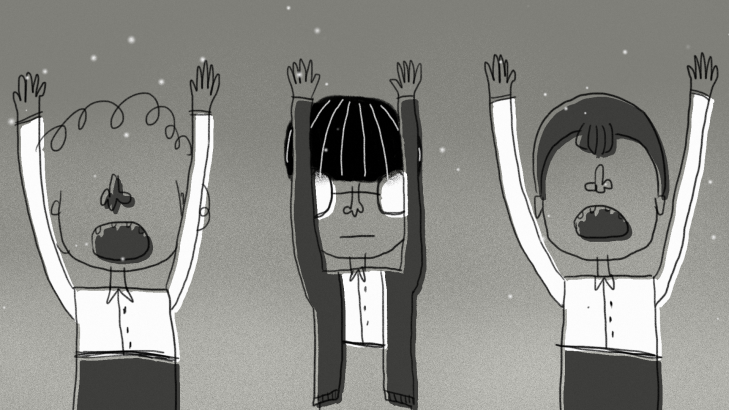 The stream of consciousness in the film “32-Rbit” (dir. Victor Orozco Ramirez) is a way for the director to reflect on a modern world, where our own memories start to fade away overpowered by the heaps of amateur videos made by others. The clay protagonist of the film “Love Me, Fear Me” (dir. Veronica Solomon) is ready to abandon his own identity to gain admiration and respect of others. Documentary animation “Love He Said” (dir. Ines Sedan) presents the poet Charles Bukowski in the moment of his emotional weakness. The shots from the archive footage showing him meeting the audience in San Fransisco, which were painted frame by frame, are intertwined with the illustration of the poem he recites. “Augenblicke – a Blink of an Eye” (dir. Kiana Naghshineh) is an animated thriller registering a crime from the perspective of the victim and the villain. The shots showing the points of view of a woman and a man change so quickly that they resemble “a blink of an eye”.

The list of films selected to the international short film competition: