Opening Ceremony at the couch

This edition is special, as it is an anniversary. But we’re not having 60 cakes at the nearby Andrzej Wajda’s Square. There will be no toasts, no concert at the Słowacki Theatre. But there will be a beautiful programme that we’ve worked on for six months – Krzysztof Gierat, Festival Director welcomed guests watching the Opening Ceremony from their own homes.

Yesterday ceremony was available to watch through social media channels. Among guests who made appearances were the laureates of the very first edition of the festival -animator Witold Giersz and director Jerzy Hoffman, Paweł Ferdek, the director of the opening film “Pollywood”, and Jacek Majchrowski, Mayor of Krakow.

Our social channels were filled with greetings and photos from viewers watching the ceremony in their own homes – on the sofas, in front of TV screens, computers or even tablets. We received a lot of warm words and thanks for organizing this year’s edition in such an accessible form – sums up Olga Lany, KFF spokeswoman.

A few days in the life of the most laid back barber in Denmark. If you visit Quasim’s salon not only may you leave with the hairstyle like Will Smith or Mike Tyson but also have an opportunity to meet people and talk about love, politics or the longing for the homeland you left behind. Artur Zaborski talks with Emil Langballe, director of “Q’s Barbershop”

I have been brought back to thinking about the different ways films start, while watching the international competition of this year. I think we all agree about the importance of catching the attention of the audience from the very start. Hook the viewers so they stay for the duration of the story. Some starts are very short before the title appears on the screen, some are long, some give a promise, some set the tone and the atmosphere, some try to do all of it, some put up some questions that might or might not be answered. Some editors have told me that they often wait with the opening until the end. Having built a story or tried to, they suddenly – together with the director – “discover” the film and what is important and what not. Where do you want to take the audience? What do you want to say? Examples:

Norwegian “The Self Portrait” uses a bit more than one minute to let you into the gripping story. You see a couple of photos of a woman from behind, a woman walking, who becomes “alive” walking across a field, turns around and looks at you; off screen she has told us that when a child, she decided to stop time as she is now able to do, when she takes pictures. The last photo is of herself, the anorectic Lene Maria. Credits come and we know, what the film will be about, the character, the theme, the tone.

In “Sunless Shadows” Iranian director Mehrdad Oskouei’s voice is heard on a black background: Dear Sara, when you come into the room, sit down, push the red button and talk to the camera… she does and she talks about the murder, she has committed. Content of the film is thus revealed and the director’s and the director’s involvement and method and stylistical approach.

In Romanian “Acasa, My Home” by Radu Ciorniciuc the opening describes a paradise for kids – they swim in the lake, they fish, they have boys’ fights, they enjoy life in the nature. Until they are interrupted. The director states upfront with whom he places his sympathy.

Polish Maciej Cuske – in “The Whale from Lorino” – opens with wild images of sea waves smashing against rocks somewhere in the world. The images are matched with words of a fairy tale about whale and man. An opening that makes the promise of a film with poetic moments.

Openings… I am totally indoctrinated by words of Niels Pagh Andersen, Danish editor, mostly famous for his work on Oppenheimer’s «Act of Killing» and «Look of Silence»: Hold Back information, give the necessary input upfront, but don’t pour information into the head of the poor viewer. Build it up, step by step, give the viewer a chance to take part, remember that the film is made in the head of the viewer, remember that one viewer interprets in one way, another in another way!

That is what a good documentary can do – by good I mean documentaries that have many layers, many openings, to use that word again, for interpretation.

And from a previous festival: Is Piotr Stasik’s New York film a film about New York. Absolutely. Is it about «la condition humaine », our existence, loneliness, a philosophical work, is it about Love, Yes to all, it has many layers, a film that will be watched and evaluated differently depending on age and sex. And where you are in your own life. I go to visit family in New York every second year, I have observed people in the underground as Stasik is doing, it’s fascinating but I know it so well that I can go to the other levels: Life as we live it, together or alone. And as a film buff who wants to be surprised, I enjoy the sound and rhythm that the director gives me. It’s new and innovative.

As every year we have asked journalists and bloggers to rate films from the Documentary Competition. During the 60th KFF, stars will be awarded by Tue Steen Müller (filmkommentaren.dk), Ola Salwa (Cineuropa), Patrycja Wanat (freelancer), Bartosz Staszczyszyn (Culture.pl) and Michał Piepiórka (Blizej Ekranu).

The viewers can participate in the Audience Poll and vote for the Audience Award – whenever online screening ends just choose the appropriate number of stars! 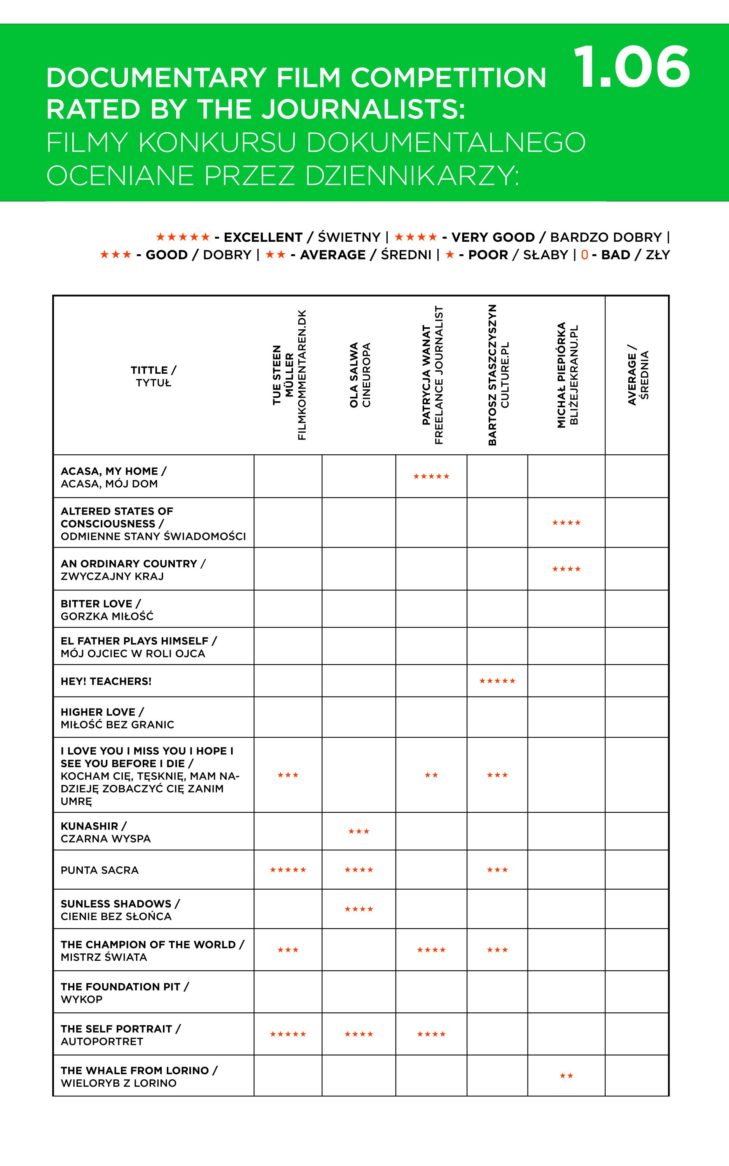