Every year Krakow Film Festival presents documentary, short and animated films from a chosen country. This year we take on a journey to Denmark, which is considered one of the happiest countries in the world. Will films from Focus on Denmark section fit that description?

Zuzia is a little girl with a rare genetic disease, one that makes her skin fragile like a butterfly’s wings. The simplest touch can make her skin blister and fall apart, and because of this, she lives in constant, excruciating pain. After a fundraiser for the $1.5 million needed for her treatment received worldwide support, she and her family move from their native Poland to the US for a long course of procedures that might save her, or kill her. Jaroslaw Szmidt’s The Butterfly’s Dream captures the journey Zuzia and her family undertake in order to try to save her life.

Filmed over the course of several years, what seems at first a typical dramatic medical film, turns out to be an incredibly powerful tale of the fragility and resilience of a tiny human, facing an enormous challenge with acceptance and might. Her story goes way beyond its premise and into the depth of the human spirit, breaking your heart to pieces and putting it back together again – leaving you raw, shaken, and touched.

At birth, Zuzia was handed a challenge no one should have to face. Her disease makes her skin blister easily and painfully, from as much as a simple shuffle. Her condition affects her insights too, and it lowers her life expectancy dramatically. More than that, it takes away her childhood and turns her life into a living hell. But the pain she lives with every day, the debilitating power of her condition, and the daily procedures of changing bandages and feeding through a tube are part of how she learned to know life. Her parents are strong guardians and caretakers, having learned to deal with all her needs, struggling to keep up hope.

Throughout the film, Szmidt’s cinematography feels almost as composed as in a fiction film. So many of Zuzia’s moments are hard to watch, it is unimaginable what it’s like to be her and to witness her day in and day out, in real life. Her pain penetrates viscerally through the screen, and watching her and her family is so intimate, it feels like being present and bearing witness to something no outsider is actually justified to watch.

As the film progresses, this camera-eye into her world and its regular presence in the midst of such private moments become so intense, they blur the awareness of the existence of a screen separating the viewer from the characters of the story. Empathy replaces awareness – endless empathy – and an arresting desire to avert the eyes but not being able to, instead frozenly bearing witness to this detailing of each long and excruciating process Zuzia and her family go through.

With a huge smile and a cheeky face reminding of Pippi Langstrumpf, seeing Zuzia, listening to her reflections on her condition and on the world around – it’s hard to keep up with the idea that she is actually a child. The experience of her illness has given her a complex medical vocabulary and understanding, way beyond her age. Besides this, Zuzia is insightful, reflective, and aware. She accepts her reality but longs for it to change, and observes the world she cannot participate in carefully, smiling at it from the side. Her words and her presence make her a strong character and a memorable one.

But Zuzia is not the only hero of her story. The dignity and power of her parents – who break down occasionally but stand up again and keep going – is humbling. They go through daily medical procedures they have become experts at, they move to the US where not speaking English is just one of their challenges, and, through it all, they keep up a sense of perspective and normalcy. That sense of normalcy is a survival anchor for all of them, including Zuzia’s sister who is her donor match and eventually provides the bone marrow that can save Zuzia’s life.

Watching the reality of both them as parents and caretakers, and Zuzia’s – as a tiny child fighting for her life, is an emotional journey mediated by Szmidt’s presence and his ability to translate it into cinema. Eventually, what each one of the characters individually, and then together as a team inspires, transcends the struggle, and becomes an illustration of how love and human resilience can stretch so far.

Watching “The Butterfly’s Dream” is an exercise in surrender. The link that bonds the viewer to this story is just pure emotion, all judgement and all thought suspended for its whole hour and a half. This bond takes you on board the rollercoaster life journey of a tiny human with the wisdom of an elder and a strength that could move mountains and beyond. And just like the experience changes Zuzia forever, you can’t come out at the end of this film the same person you were at the start.

This article originally appeared in Modern Times Review, media partner of the 60th Krakow Film Festival. Follow the MTR website as during this week more reviews of the festival films will appear.

Since its launch, MODERN TIMES REVIEW – The European Documentary Magazine has established itself as one of the most respected sources of independent reviews and articles on documentary films that matter, both online and as a print magazine. With content provided by a team of esteemed critics well known to the European film community, MODERN TIMES REVIEW can be found in partnership with all the relevant European documentary industry in particularly on-site for audiences and in the delegate bags of professionals at key festivals. Printed three times annually and with regularly updated online content, the MODERN TIMES REVIEW archive consists of nearly 2000 reviews, says, interviews, comments and more, over the past 20 years. 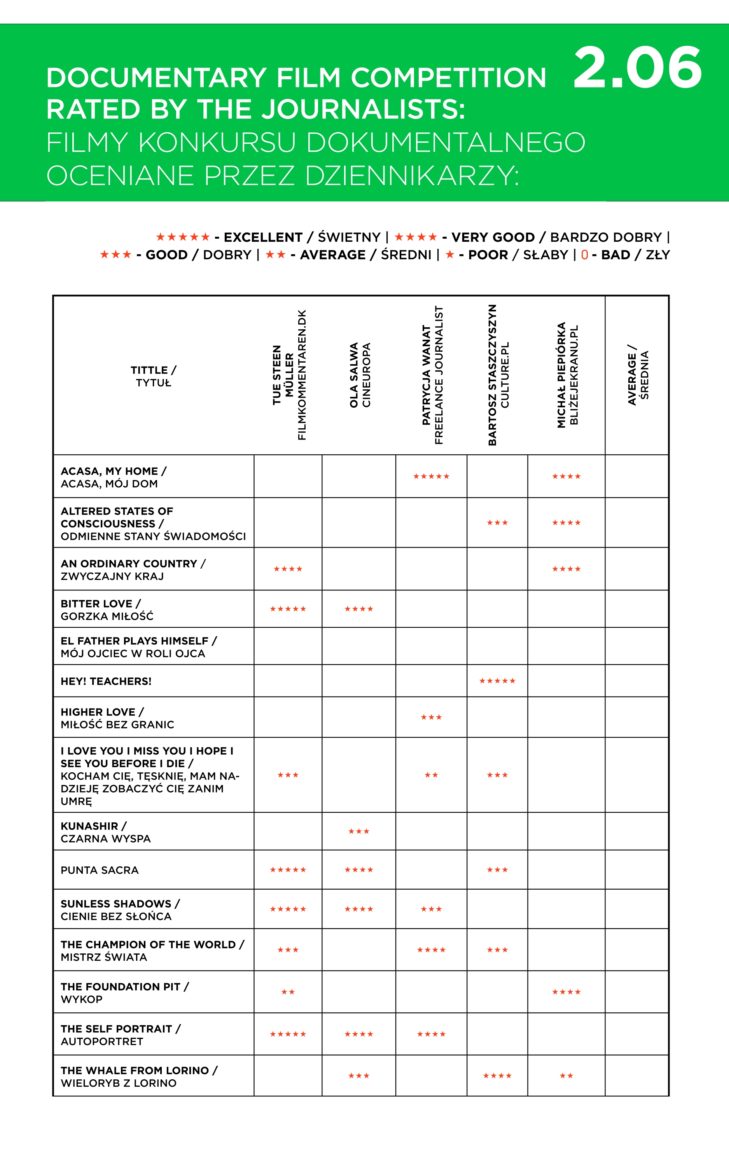